No draw extensions, ever. Thats our promise!

Win this Epic Darth Revan Force FX Elite Lightsaber! A must have Collection Item for ANY Star Wars Fan!

Open to UK & NI Only

Matthew Looted a Collectors Item! Are you next? 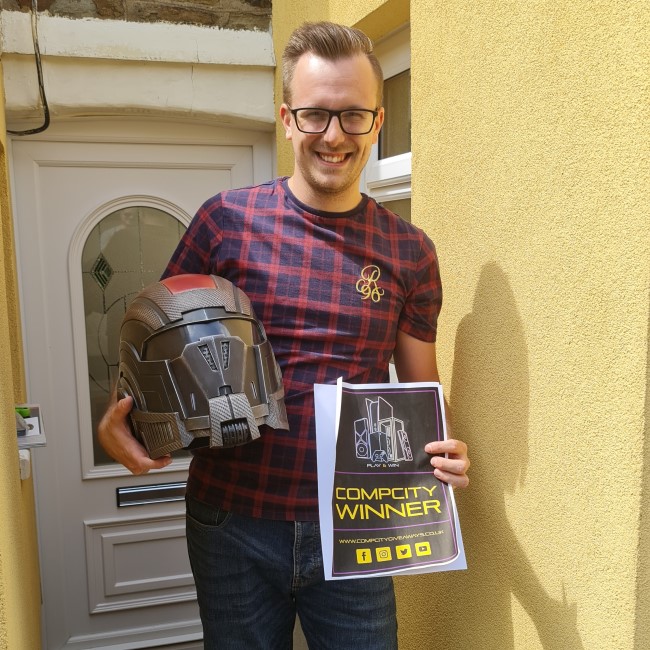 Journey to the Dark Side and shop this Official Darth Revan Lightsaber replica Toy! This Force FX Lightsaber is inspired by the complex character from the Star Wars saga, Darth Revan.

Darth Revan first appeared in the Star Wars video game, Knights of the Old Republic in 2003. His story and origin was detailed further in the sequel to the video game in 2005.

Revan was found by the Jedi Order as a child and became the apprentice of Jedi Master Kreia. The Young Padawan had a hunger for knowledge and power, and soon became the Jedi's most promising pupil. Darth Revan lived approximately 4000 years before the events of the Skywalker Saga. In Star Wars Lore, Revan was a powerful Jedi who served in the Mandalorian Wars as the Supreme Commander of Jedi and Galactic Republic forces.

He fell to the dark side of the Force and became a Sith known as Darth revan. Along with his Padawan-turned-Sith apprentice Darth Malak, he wreaked havoc on the entire Republic. His complex origin and backstory, alongside his constant switching between the light and dark sides of the force, made him an instant fan-favourite!

Darth Revan’s journey from Jedi Knight to Sith Lord and back again is evidenced by the color of his lightsaber. As a Sith Lord, Revan’ lightsaber has a red blade, but as a redeemed Jedi Knight he fights with a purple-bladed lightsaber. Recreate your favourite gameplay moments or let your imagination run wild! With this incredible replica Force FX Lightsaber, featuring advanced LED technology, fans can imagine they are truly a part of the Star Wars adventure.

This incredible toy includes a removable kyber crystal, which in the movies were rare, Force-attuned crystals that were used by the Jedi and the Sith in the construction of their lightsabers. This feature just adds to the incredible detail and care taken in this product's design!

Combining advanced LED lights and sound effects inspired by the movies and video game, this Darth Revan Official Star Wars Lightsaber will make the perfect gift for any fan! Includes Stand and Removable Kyber Crystal: Proudly display this lightsaber on the included stand, with or without the removable blades, and show off the included removable kyber crystal.

Collect them all: Look for other Star Wars The Black Series premium roleplay items such as Force FX lightsabers and helmets (Sold separately. Subject to availability.)

The competition will close on the end date listed or as soon as the tickets sell out.
There is only 1 prize unless otherwise stated.
The promoter is CompCity Limited, Registered company number 13005436
Restrictions: 18+ UK & NI only
By entering our competitions, you confirm that you have read and agreed to our terms and conditions.
The update & live draw will be on “CompCityUk” Facebook page.
You can watch the LIVE draw on our Facebook page - Make sure to follow CompCityUk to keep updated!

When will the competition end?
This competition will end on the closing date or once all the tickets are sold. No draw extensions, ever. Thats our promise!

How do I get my ticket numbers?
All ticket numbers are randomly generated and allocated with your order, please check your order confirmation (check spam as it sometimes ends up in there) or your order history in your account.

How will the winner be selected?
Once the competition closes, for complete fairness and transparency, we go Live via Facebook and Twitch and we use Google’s random number generator to as its name-sake suggests; select a lucky entrant at random. For example: If 250 tickets are sold, the number generator randomly selects a number between 1 and 250 – The number selected could be yours!
This is a 100% random selection and we have absolutely zero control over who wins these fantastic prizes.

How will the winner be announced and notified?
The winner will be announced live on Facebook. Once the winner has been announced they will be notified via email, Facebook or telephone during or after the live draw. Please see the “Winners” section of our T&C’s for more information.

How will I receive the prize if I win?
We will contact you directly to arrange delivery with you. We will always use a trusted courier with a tracking service to ensure the safe delivery of your item(s).

Will you use the winner's information publicly?
Yes, but we’ll only use your first and last name to announce and confirm the winner on our live draws and Social Media platforms, including our Website and E-mail alerts. No other information is shared.